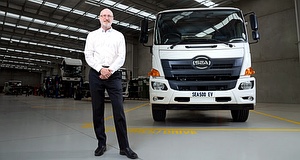 FOLLOWING the appointment of Paul Sansom of Volkswagen Group Australia to its Board of Directors last month, the Electric Vehicle Council (EVC) today announced that Glen Walker of SEA Electric has been accepted to the Board of Directors of the ‘organization.

As Vice President of SEA Electric Asia Pacific, Mr. Walker leads the company’s operational activities in the region, including new products, design for manufacturing, assembly systems innovation and various channels. distribution of products, according to the CVS.

Mr. Walker also recently participated in the launch of SEA Electric’s new electric truck. The company’s Melbourne plant produces several vehicles which are available through a nationwide dealer network. The vehicles are powered by SEA Electric’s exclusive SEA-Drive power system, which is available in applications ranging from 4,500 kg to 22,500 kg.

The Vice President of SEA Electric said having a voice in EVC was a positive development for the entire commercial vehicle segment as it moves towards an electrified future.

“Over the past six years, the EVC has become the leading industry association representing the modern zero-emission mobility sector in Australia,” said Mr Walker.

“Throughout this transition period, he has provided invaluable political support at all levels of government.

“I look forward to adding the unique perspective of zero-emission commercial vehicles to this conversation, supporting EVC’s mission to accelerate Australia’s transition to sustainable vehicles.”

Mr. Walker brings years of automotive and transportation executive experience to EVC. He worked for Kenworth Australia for 18 years in roles such as Chief Engineer and spent three years on an executive assignment with Paccar in Seattle, USA.

He also has extensive recent experience with major transportation companies.

The EVC says it represents all companies producing, powering and supporting electric vehicles in Australia, aiming to make the market more affordable and competitive through a strong regulatory framework and increased consumer awareness.