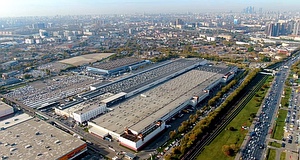 With Russia’s invasion of Ukraine making headlines around the world, automotive industry supply chains are under new pressure.

In addition to component deliveries, challenges arise in terms of critical raw materials in the context of supply disruptions from Ukraine and trade sanctions imposed on Russia by the United States and the European Union.

The first disruption felt by automakers was a delay in component deliveries to European factories. As many as 22 companies based in Ukraine produce and export automotive components, such as wiring harnesses, electronics and seats.

Since the start of the military invasion of Ukraine last week, the United States and several European countries have instituted sweeping trade sanctions against Russia, including banning several of the country’s banks from the Swift global financial payment system, which has made it cumbersome for many businesses. to do any type of trade with the nation, even in sectors that are not sanctioned.

Renault, for example, said it would suspend some operations at its Russian car assembly plants due to logistical bottlenecks caused by parts shortages.

This action would be a consequence of the “reinforced borders” between Russia and its neighboring countries (through which the parts are transported by road freight) and the decision of many European countries to close their airspaces as a result.

For Groupe Renault, Russia is its second largest market (after France) because of its majority stake in AvtoVAZ, which produces vehicles in Togliatti for the Lada brand, the national market leader. It also has another assembly plant near Moscow.

Meanwhile, VW Group, Stellantis, Continental, Magna International and Visteon (among others) have facilities in Kaluga (180 km southwest of Moscow) – the center of Russia’s automotive industry.

And with at least a quarter of the parts used in the production of Russian-made vehicles expected to come from abroad – including the United States – these assembly plants could struggle to keep operating while the sanctions are in place. place, analysts and industry officials told NBC News. .

Until the crisis is resolved, automakers operating in Ukraine and Russia will have to make compromises to reduce the negative impact of the conflict and sanctions on their businesses.

Finnish tire maker Nokian said it was shifting production of some key product lines from Russia to Finland and the United States, while automotive technology provider Aptiv is said to have shifted high-volume parts production outside of Russia. Ukraine over the past few months in anticipation of possible hostilities.

Suffice to say that the Russian automotive distribution sector has already begun to feel the brunt of the sanctions.

The value of the ruble fell by 40% against the US dollar (its decline began at the end of October) and the Central Bank of Russia responded by more than doubling its key rate to 20%.

Volvo was the first major automaker to suspend shipments of cars to the Russian market “until further notice” due to “potential risks associated with material trade with Russia, including EU sanctions and the United States,” he said.

The RIA news agency reported that Volkswagen had temporarily halted deliveries of cars already in Russia to local dealerships, and Swedish and German truckmakers AB Volvo and Daimler Truck said they had halted all business activities in Russia.

Although not immediately apparent, the biggest impact of the crisis could be on the automotive industry in general, due to the potential scarcity and soaring prices of raw materials and raw materials generally supplied by Russia. and Ukraine.

The document goes on to say that the Russian company MMC Norilsk Nickel PJSC extracted 40% of the world’s palladium (a major component of catalytic converters), as well as around 11% of the world’s nickel production (used in the manufacture of stainless steel and lithium). ion batteries).

Russia mines about 4% of the world’s cobalt (also used in batteries), a quarter of its vanadium, used in steelmaking, and 3.5% of its copper.

Even though there are other countries from which these materials can be obtained, the price of palladium – in particular – had started to climb before Russian forces entered Ukraine.

The same is likely to happen for nickel, which will drive up vehicle production costs and invariably be passed on to car buyers.

Due to the closure of Ukrainian ports, there were “at least 22 oil tankers obstructing the Kerch Strait, a key waterway under Russian control,” the WSJ reported.

In addition, cargoes of steel and iron ore were unable to leave the ports of Mariupol, Yuzhne and Pivdennyi. The disruptions prevented steel operations, such as ArcelorMittal SA, from restocking raw materials and Ferrexpo PLC from exporting iron ore pellets.

who usually buy these pellets, had to scramble to find alternative suppliers.

Finally, it remains to be seen whether Russia will retaliate to the sanctions by cutting off its supply of raw materials and whether its traditional allies will be able to follow suit.

“The big question is what is China doing,” said the WSJ quoting Sam Abuelsamid, senior automotive analyst for Guidehouse Insights.

“If we impose (heavier) sanctions on Russia, (they) could react and cut us off from a lot of things that we need, like lithium.”