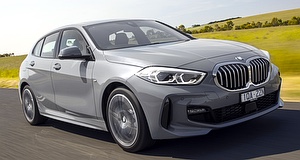 The future looks uncertain for front-drive compact cars from Mercedes-Benz and BMW, as German premium brands seek to prioritize profit margins on high-end models – rather than high-volume ones – with their upcoming battery electric products.

Speaking at the recent Financial Times Future of the Car 2022 conference, Mercedes-Benz chief executive Ola Kallenius said the company had all but sold off its electric cars as tight supply chains made it difficult for the to meet growing demand.

Customer response to the company’s EQ family of electrified cars has been “so great that we’re doing everything we can to get the cars to customers as quickly as possible,” he said.

“We are now in full development of an electrical architecture entirely dedicated to AMG,” Mr. Kallenius revealed, adding that the platform would come to market “in late 2025”.

Mr Kallenius said more details of Mercedes-Benz’s plans for its product portfolio would be revealed as part of an upcoming strategy update, but hinted at a selection of smaller models.

“We’d rather be looking up than down,” Kallenius said, which doesn’t bode well for the prospects of Sindelfingen’s A- and B-Class models, as well as their CLA four-door coupé or of their GLA and GLB SUV versions.

“We’ll talk about that next week, but it’s not our goal to be a competitor to volume producers. This is not what the Mercedes-Benz brand stands for,” Kallenius told Autocar.

Sales volumes of Mercedes-Benz’s more compact products have been limited lately as the company has prioritized semiconductor supplies for more profitable models.

Without citing any particular models, Mr. Kallenius confirmed that the company’s high profitability during this period had made it possible to envisage a more profitable operation.

“Even before the supply constraints began, we made it clear that our strategy was not to seek volume but to seek value for our customers and our business,” he said.

2025 will also be a pivotal year for Mercedes-Benz’s arch-rival BMW.

The company will lay the foundation stone for the plant next month and the first pre-production cars, widely expected as units of the next generation 3 Series (or one of the brand’s other mid-size products) will roll off the assembly line. 26 months later.

In particular, BMW expects to achieve 30% savings from the Neue Klasse’s new cylindrical cell format, which is similar in design to that used by Tesla, Bloomberg reported.

BMW will offer a total of eight battery electric vehicles (BEVs) by the end of this year, but Automotive News Europe quoted Mr Zipse as saying the number was even higher.

“If we include the pre-production vehicles, we are already building 15 BEVs (one of which is the upcoming iX1 small SUV),” he said.

Speaking of the soon-to-be-unveiled all-electric iX1 (for the Australian market), Autocar said the future of small front-wheel-drive BMW models is “under review”.

Following the recent launch of the BMW 2 Series Active Tourer overseas and the launch of a new Mini model range next year, the predominantly front-wheel-drive architecture that underpins the 1 Series, 2 Series Gran Coupé , X1 and X2 will be 12 years in 2027.

Industry watchers predict that by 2027 most cars with internal combustion engines (in Europe) will likely have to be plug-in hybrids with a range of around 64 km. This would require a larger architecture, which would translate into longer and more expensive vehicles.

Considering this, a BMW source said Autocar’s senior planners and Bavarian company officials are reconsidering the business model of producing smaller models based on the group’s UKL2 platform or its FAAR derivative (optimized for electrified powertrains).

“There are a number of issues to consider,” the source said. “First, the size of UKL makes electrification more difficult because the potential size of a battery is limited.”

It also remains possible that ever stricter EU emissions rules will require at least more underfloor space to accommodate a significantly larger catalytic converter. Again, this could push BMW Group to favor larger models that will be more expensive – and more profitable.

BMW might be dissuaded from giving up its compact cars, which – above all – aren’t selling well in North America, because future products might still be derived from models in the Mini-branded stable (Mini is destined to be a all-electric brand by 2030).

Furthermore, “a compact model is important as ‘my first BMW’. If we left this market, we would give the market share to rivals,” the source said.

It’s confirmed that Audi’s smallest hatchback, the A1, will retire at the end of its current life cycle and the brand’s Q2 compact crossover will likely be phased out as well.

According to Autocar, this underscores the challenge for premium brands to build electrified small cars at lower prices.