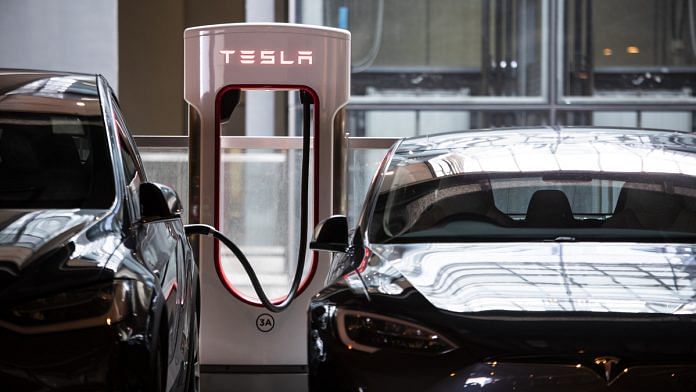 VSThe EV boom in China is progressing at full speed, with Beijing developing a robust EV market. The emergence of China’s electric car industry could be a game-changer for its economy.

You may have heard of Tesla, but do you know Byton, BYD, SAIC, Nio and XPeng? These are some of the most innovative EV companies in China going head-to-head with Tesla and other big EV companies elsewhere. For now, these companies completely dominate the Chinese market and eat away at Tesla’s business in China. In 2021, China’s electric vehicle industry was worth $124.21 billion.

Sales of electric cars in China are expected reach 6 million by the end of 2022 as demand for the vehicle segment surges. China’s electric car industry is ahead of the United States and Europe, where the projected sales for 2022 will be around 1.2 million and 3.2 million respectively.

China’s State Council aims to make its entire public transport fleet fully electric by 2035. Hainan Province is leading in promoting the electric vehicle boom. The province plans to completely eliminate the sale of gas-powered vehicles by 2030.

The Joe Biden administration in the United States is concerned about China’s growing advantage in the electric vehicle market. In February, the US Congress allocated $7.5 billion for electric vehicle charging infrastructure.

But how do Chinese companies beat Tesla? By adapting to new trends and developing solutions that can be marketed quickly to a large national audience.

Chinese companies are pooling their best technological offer to develop a new range of electric cars for domestic and international markets.

A joint venture between Shanghai Automotive Industry Corporation (SAIC), US-based General Motors and Wuling Motors has launched an affordable electric car in Indonesia. Lu Kang, the Chinese ambassador in Jakarta, with enthusiasm launched the new electric car for the Indonesian market in August.

The three models of Avatr are completely crew with Huawei technology, CATL batteries and the AVATRANS intelligent piloting system. Avatr cars cost between $51,892 and $60,790.

The Chinese BYD is supply Electric buses to Bangalore Metropolitan Transport Corporation (BMTC) and the State of Telangana in collaboration with the Indian company Olectra Greentech Ltd. BYD has extended its network of dealerships in eight cities across India despite geopolitical tensions between India and China.

The use of Huawei’s technology in Chinese electric cars has raised concerns in the United States, but the Biden administration has approved the sale of semiconductor chip technology meat to the auto industry.

Semiconductor chip technology is accelerating the IoT (Internet of Things) revolution in electric cars. Huawei is the leading vendor in the segment as it has successfully secured semiconductor chips for auto parts.

A long-standing debate is how China innovates, or does it even innovate? The answer is complicated.

Elizabeth Economy, senior adviser on China for the U.S. Department of Commerce and renowned expert on China policy, describe the Chinese approach to innovation in his book The third revolution“China’s patents have generally been viewed as incremental improvements over earlier more innovative work by others or are process-oriented, making something faster, better, or cheaper.”

Beijing has set itself the goal of reaching two million patents by 2015 and achieved it before the deadline. But in 2014, more than 60% of patents belonged to the “utility and design” category, which does not represent a significant breakthrough or innovation. In 2016, 96% of patents in China were filed in the country.

The number of Chinese academic institutions and private companies filing patents has increased exponentially, but this is not a sign of a leap forward in innovation.

The gold standard for patent filing is triadic patents filed in major global technology markets through patent offices in the United States, Japan and Europe.

Although China has made improvements in triadic patent filings between 2016 and 2021, it is still nowhere close to the United States.

The incremental innovation model has been rewarded by the Chinese state through sustained funding of projects that do not take off.

But the model has fostered a culture that’s averse to taking risks and innovating in industries that may not provide short-term financial rewards – the US and Europe still lead in basic research.

China’s electric vehicle boom is another example of Chinese companies gradually innovating and selling in droves. China’s EV party isn’t ending anytime soon; the rest of the world will have to catch up.

The author is a freelance columnist and journalist. He was previously a Chinese media reporter at the BBC World Service. He tweets @aadilbrar.