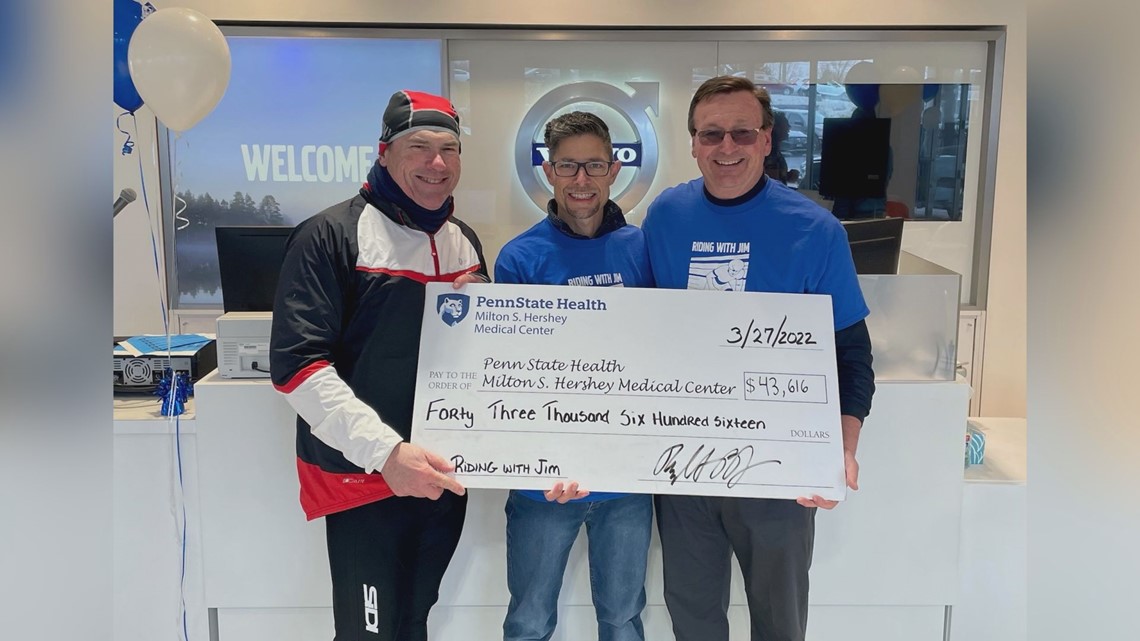 Jim Wilson, Business Development Manager for Lehman Volvo, is fighting the toughest battle of his life.

CUMBERLAND COUNTY, Pennsylvania — Jim Wilson has been an employee of Lehman Volvo for 25 years.

“He is one of the healthiest individuals we know,” said Megan Barto, one of the organizers of the “Riding with Jim” cycling event. “He rode about 11 centuries, or about 100 miles at a time on his bike in 2019.”

“He’s been such an inspiration to us,” said Ray Bromley, president of Lehman Volvo. “Jim’ is a guy of great faith and belief and he fights like something I’ve never seen.”‘

On Sunday, Jim’s Volvo and the families of cyclists teamed up to rally around him.

150 riders braved winter conditions at Lehman Volvo of Mechanicsburg in Hampden Township for the first ever “Riding with Jim” bike ride.

“[There’s] Winds of 17mph gusting up to 25, 30mph so it’s tough for all of us to be here but it’s certainly not as tough as last year for Jim and that’s really why we’re all here,” Barto said.

Sunday’s event was just one part of Lehman Volvo’s month-long fundraising effort in honor of their colleague and friend.

“We were able to do a test drive program where we gave a certain amount of money to everyone who came and tried a new or used Volvo and so did we, every time someone bought a Volvo. this month we were also donating money,” Bromley explained.

In total, he raised more than $43,000 for Penn State Health Cancer Research.

“Much of the ongoing research is fueled by philanthropic donations, so events like this make a huge difference,” said Megan Weber, associate director of community fundraising at Penn State Health.