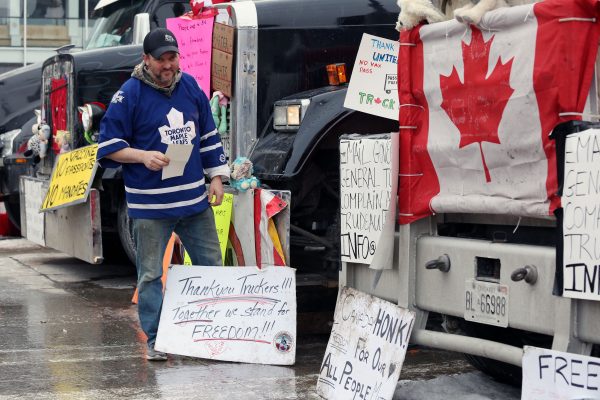 The protest by Canadian truckers has temporarily sidelined a key auto industry transportation route, adding stress to a North American auto industry already pinched by low inventories and supply chain issues that have caused skyrocket the price of vehicles.

Several major automakers said on Thursday they cut production and reduced work crews due to the blockage of the Ambassador Bridge, which connects Windsor, Canada, to the US city of Detroit.

The bridge has been essentially offline since Monday night as a two-week uprising led by truckers protesting coronavirus restrictions spread from the Canadian capital.

Miller said finished goods cross the bridge north and south, while parts and components may cross the border six or seven times during the manufacturing process, making country of origin essentially irrelevant to the industry. ‘automobile industry.

The bridge is used daily by more than 40,000 commuters and tourists, as well as trucks carrying an average of $323 million worth of goods.

The auto industry has relied on easy and reliable access to the bridge since the 1960s, said Fraser Johnson, a supply chain expert at Western University’s Ivey Business School.

In an age of “just-in-time” inventories, “factories can have between a few hours of inventory and a few days of inventory,” he said.

“So as soon as we have disruptions like this, it jeopardizes the continued operation of car factories and their supplier.”

– Worsening of the “already bad” situation –
Canadian and U.S. officials and industry groups have warned of significant damage to trade and jobs if the disruption continues.

So far, automakers have described the impact as significant but limited.

Ford is operating its Canadian plants in Oakville and Windsor at “reduced capacity”, a company spokesperson said. “We hope this situation will be resolved quickly as it could have a widespread impact on all automakers in the United States and Canada.”

A Toyota spokesperson alluded to existing supply shortages, adding that plants in Canada and the state of Kentucky have been impacted by “this most recent challenge.”

Toyota expects disruption throughout the weekend, but “we don’t expect any employment impact at this time,” the official said.

The disruption comes as US inventories of new vehicles remain extremely low and used car prices are still high, although the massive increases seen last year have slowed.

Automakers offered mixed reviews on the image of semiconductors that impacted manufacturing. Most companies expect the shortage to ease somewhat in 2022 as long as there are no more semiconductor failures due to Covid-19 restrictions or other unpredictable reasons. But supply is expected to remain tight at least until the middle of the year.

“This is on top of an already bad situation – the shortage of microchips, a situation that is unresolved,” said iSeeCars.com analyst Karl Brauer.

And Johnson said the Ambassador Bridge disruption is not easily resolved with alternate routes. For example, moving traffic through Buffalo is problematic because the city’s roads lack infrastructure to handle truck traffic.

Miller said the route is also an important route for other raw materials and goods, such as aluminum exported from Canada to the United States or plastics shipped in the opposite direction.

“For the auto industry, this is very worrying,” said Miller, who warned the pain would spread to other sectors if the blockade drags on.